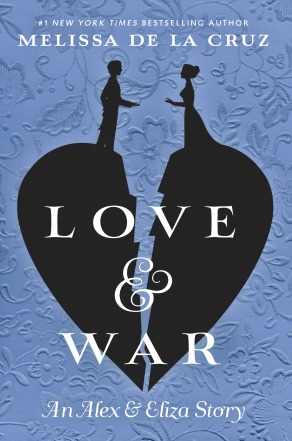 Disclaimer: This review is solely my opinion. I was provided a copy of this book from Penguin Young Readers as a part of  Penguin Teen #partner in exchange for my honest review.  The comments in this review do not reflect the views of the author or the publisher. The copy used in this review is an uncorrected copy from the publisher, some quotes may have been changed prior to publishing.

As the war for American independence rages on, Alexander Hamilton and Elizabeth Schuyler begin their new life as a married couple. Still, Alex is as determined as ever to prove his mettle and secure his legacy . . . even if that means leaving his beloved Eliza behind to join the front lines at the Battle of Yorktown. But when the war unexpectedly arrives on Eliza’s doorstep, she must fight for a better future–for their fledgling country and for her marriage.

Yet even after the Revolution comes to its historic close, Alex and Eliza’s happily-ever-after is threatened. Eliza struggles to build a home in the hustle and bustle of New York City just as Alex’s burgeoning law practice brings him up against his greatest rival–the ambitious young lawyer Aaron Burr. And with Alex’s star on the rise, Eliza can’t help but feel neglected by a husband who seems to have time for everyone but her. Torn apart by new trials and temptations, can Alex and Eliza’s epic love survive life in the big city?

“The say the pen is mightier than a sword, but that is not true in the battlefield.”

“and then there was no more time or desire for conversation, as the most articulate statesman in America found words paled in comparison to the sublime experience of being with his beloved.”

Melissa de la Cruz is the #1 New York Times, USA Today, Wall Street Journal, Los Angeles Times, and Publishers Weekly internationally bestselling author of many critically acclaimed books for readers of all ages, including Alex & Eliza: A Love Story, Disney’s Descendants novels, the Blue Bloods series, and the Summer on East End series. Her books have sold over eight million copies, and the Witches of East End series became an hour-long television drama on the Lifetime network. Visit her at melissa-delacruz.com

Love & War is part two of the Alex and Eliza love story. The author did a fantastic job developing both characters and continuing the storyline. In this book, we follow the life of Eliza Hamilton and Alexander Hamilton as both grow and flourish as a married couple. Alex has been tasked with the challenge of having to support his new wife and try to advance his career. Alex harbors the guilt of growing up as an orphan with no ties to a family. He had to fight for Eliza’s hand in marriage and the approval of her father; now he must fight to continue to prove he is worthy of her love. Alex feels as though the only way to establish himself as being more than just a clerk to General Washington, Alex must command his army. He wants command of the Yorktown brigade and feels he is contributing to the war by helping the fight against the British. Will his efforts lead to victory? Can he support Eliza after the war is complete? Alex must decide where he will reside once the war is over and how he will help his family. Will his new career turn out to be a success or a failure?

Overall this is a well written historical teen fiction. It showcases the struggles many women faced during the war. Women were meant to be seen and not heard. Women were the wives, caretakers, gardeners, seamstress, and midwives. While men spoke politics, fought in wars, and worked difficult positions. This book showcases the gender gap during wartime and the concepts instilled in women. I can also tell that the author did her research before writing this series. I enjoyed the notions of honor, the love between Alex and his new wife, and the importance of relationships. I recommend this book to any teen looking for an informative, realistic historical fiction.