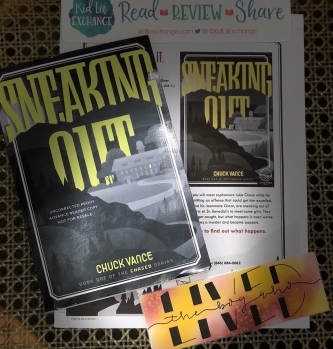 Could you sleep next to a murderer?

Luke Chase—yes, that Luke Chase, a modern hero ripped from the headlines—didn’t mean to get caught up in Mrs. Heckler’s murder. He just wanted to hook up with the hot new British girl at St. Benedict’s, and if that meant sneaking out to the woods after hours, then so be it. But little did he know someone would end up dead right next to their rendezvous spot, and his best friend and roommate Oscar Weymouth would go down for it. With suspects aplenty and a past that’s anything but innocent, Luke Chase reluctantly calls on his famous survival skills to find the true killer.

“You refuse to acknowledge your  heroics. Now you can’t deny them. You can now know that you are truly special.”

“Ever since he had been in captivity he had learned to play game where he had tried to pick up on small clues from the small things people said about themselves. Sort of like honing his powers of inference, Sherlock Holmes style. He had started it because he never wanted to be surprised by people he thought he knew.”

First off, Chuck Vance did a great job capturing my attention this entire novel. This young adult fiction book provides a thrilling mystery between these pages. The begins with a group of four students at a boarding school all deciding to sneak out one evening. They have no idea what awaits them in the woods on that starry night. Luke, Oscar, Kelsey, and Pippa all decide they want to take a break from the dorms and head into the woods for a midnight stroll. Luke is hoping to get closer to Pippa, the new student from England with a hard personality. The story begins to unravel when the students hear a noise out in the woods hoping they are alone they remain quiet while Oscar ventures out to investigate. Luke hears Mrs. Heckler arguing with a man in the woods but who is that man? Everyone assumes that Luke is paranoid because of the things that occurred in his past. The four start to head back towards their dorms hoping not to get caught and put the chilling night behind them. The following day the entire school gets word that Mrs. Heckler was found murdered in the woods the same night those four were out there. Luke, Oscar, Kelsey, and Pippa must decide to either share the information about that night and risk expulsion or try to solve the mystery on their own. Luke must decide who to trust as he watches his roommate and best friend get framed for murder. Everyone has something to hide including Oscar, Kelsey, and Pippa. As Luke starts investigating her begins to uncover many secrets about his friends, his teachers, and even the late Mrs. Heckler.  Can the Kidnapped Kid use his survival skills to locate the real murderer?

This book is well written, and the plot twist was fantastic. The entire novel I thought one character killed Mrs. Heckler, but in the end, it was someone else. I was extremely confident in my detective skills, and I was on the edge of my seat. I prevented myself from looks to the end of the book to ease the pressure of finding out who did it. In this “whodunit” novel it is hard not to love the writing style and the cliffhanger at the end. Sneaking Out is book one of the Chased Series, so I am curious to see what other things Chuck Vance has up his sleeves. I recommend this book to any young adult or adult looking for a great mystery novel. I thoroughly enjoyed this book.

Interested in me reviewing your book or have suggested reads? Email me at librarielbookreviews@gmail.com